The past three weeks for me have been a crazy pace. Those with high energy love to have a schedule that is booked to the max. They spring like a pinball from one appointment to the next, not allowing a lot of leeway for any deviations. For example, when my husband and I were interested in having a child, I had some anatomy issues that could possibly have caused complications. To eliminate sterility as an obstacle in our getting pregnant, the doctor recommended we get “his count”. Who but an overachiever would book a haircut fifteen minutes after his scheduled appointment for leaving “a specimen” at the doctor’s office twelve miles away???? Talk about performance anxiety!!!!! Unlike my husband, I do NOT like an overstuffed calendar. I don’t mind it occasionally, but these past few weeks have been an avalanche of commitments. I felt that I finished with one week and took a big sigh only to look at my calendar and have to suit up for the following seven days. The alarm would go off, I’d trudge to the kitchen to put on a pot of coffee and the whirlwind would begin.

Almost every afternoon my daughter finishes her school day, she has anywhere between one to three lessons based on a myriad of extracurricular activities that include swimming, piano, voice, ballet, choir, and competitive dance. We also have to regularly and consistently practice her piano and voice as well as stay on top of any homework she may have. By the time we get home, between 7:30 and 8:00 every weeknight, I am pooped! If my day has been filled with appointments that are beyond my normal household chores, it is safe to say that when I finally, and thankfully, get home, any enthusiasm for creating a family supper has waned.

My daughter loves those foods that all kids enjoy so she starts to hound me about the dinner menu as soon as we get in the car and are heading for home. “Mom, I’m starving!!!! What’s for supper? Can we have pizza? How about homemade cheeseburgers?” Many nights, when we come lumbering through the door, my husband has finished working and is anxiously waiting for us so we can spend family time together. Don’t get me wrong, I love family time. Perhaps, I’d be a little more enthusiastic myself if I hadn’t been doing it for most of my day. He runs his business out of the house, so I get to do family time when he is home even though we don’t necessarily engage one another very much. I have family time with our daughter driving her all over town as she pursue all things Grace. As a matter of fact, as I write this, I am doing a little family time here and now breathing in my dog’s rancid gas that he just passed while lying right here on the floor next to me. UGH!!!

Last night, enjoying a glass of Chardonnay and a moment of solitude with my iPad in my bedroom, my husband, who had been hitting golf balls, came home, walked to the back of the house and said, (in one breath I might add), “What are you doing? What’s for dinner? You need to bathe Jax before we go to my parents house, because he stinks.” I smiled at him, took a sip of wine, and he left the room. Shortly thereafter, I walked to the kitchen and my husband asked, “What’s up? Is there something wrong?” I said, “No. I am just really tired. I am really ready for a break. It has been nonstop for the past three weeks.” He said, “That is what achievers do; they work nonstop. (Make me gag!!!) But the good news is that you have the day off tomorrow so you can just relax.” His words gave me pause. Our daughter was off school today so I didn’t have to drive her to school or pick her up, agreed. But having the day off??? Do mothers ever really have a day off unless they are out of town without kids? So on my “day off”, I decided to keep track of all those things that I did.

Under the best of circumstances, I am not much of a morning person. As a matter of fact, growing up, my mother hung a picture in my room that said, “Start Each Day in a Happy Way”. At 6:45 a.m. this morning, the alarm went off and my husband wanted to snuggle with me. He remarked about the pleasant sound of the birds chirping outside our bedroom window. I opened one eye, looked out the window, and murmured something unintelligible in agreement. He said, “I’m not getting a lot of feedback here.” Duh! It is before 7:00 a.m. and I do not have to get up early. I thought I was doing well to even grunt something positive about the birds! I really wasn’t feeling it! I came out to the kitchen and our daughter was watching Sam and Cat on Nickelodeon with all the artificial, canned laughter. Really??? At 7:00 a.m.??? I put on my coffee and made them both a hot breakfast. I made my husband scrambled eggs with jalapeño sausage and fresh avocado and my daughter requested a cheese omelet with half of a toasted bagel and cream cheese.

After feeding them both, I cleaned the kitchen and then threw down some Greek yogurt and a granola bar while writing a bio for an upcoming Board position at my daughter’s school . I went outside, filled the bird feeders and removed our dog’s “mines” left scattered randomly on the back lawn so they wouldn’t be squashed into the grass when the mowers came later that afternoon. I went back inside, made my bed and then bathed my dog that apparently had leftover “eau de vomit” wafting from his furry self. I thought I had taken care of the problem when I washed his face with some Bath & Body Works Warm Vanilla Sugar foamy hand soap (he didn’t look like he was very fond of it), but according to my husband, he still reeked. After bathing him in the Jacuzzi tub, I dried him thoroughly, and then had to clean the tub and surrounding area to get it back to its original state. I got the first of five loads of laundry started before heading out the door to Costco with our daughter Grace.

I didn’t have much to get at the wholesale store, but when we arrived, I spotted hibiscus trees that I wanted to put in my flower pots outside. I picked out three and then added three small boxwood plants to put in my newly extended flower bed out back. After what seemed to be an interminable winter, the thought of getting my hands in the dirt and seeing colorful flowers blooming was too powerful an urge to resist! As I was checking out at the register, one of the kind gentlemen working there offered his assistance with getting them to my car. As we approached my vehicle, I realized I was in a bit of a quandary: 1.) I had forgotten that I had brought my 55 pound freshly bathed black furry burpbag…I mean pooch (I’m still not happy with him vomiting on the rug). 2.) My car is much smaller than those I have had in years past. Seeing my dilemma, the man chuckled, scratched his head, and said, “I need to get back inside.”

Because it is a new car, I had to call the dealership to figure out how to remove a retractable cargo screen that was prohibiting my progress. As they say, where there’s a will, there’s a way. Once Grace and I loaded the car with the three trees and three bushes, we went back in to have lunch. After lunch, we drove to Kroger to pick up the items that we were unable to find at Costco. We finally got home and unloaded the overstuffed car. What an absolute mess!!! Luckily, I keep extra blankets and towels to throw down to keep those kinds of mini disasters somewhat contained. I brought the groceries into the house only to realize that I had forgotten to get the blueberries at Kroger because they didn’t have any at Costco. They always have blueberries at Costco!!! What’s up with that? I hopped in the car, flew through the produce section and was back in no time.

Finally, I was able to start the Blueberry Sour Cream Coffee cake to take to my inlaws for Easter. It came out of the oven beautifully, and then I cleaned the kitchen. I folded my forth load of laundry before going outside to start putting the trees in the pots. When I got finished planting the last of the trees in its pot and watering them thoroughly, I put everything in the garage and then got started on dinner. I cleaned up the kitchen and then sat down to play a little Words with Friends…Though I feel worn out, there is nothing better than having a day off…I highly recommend it!!!! 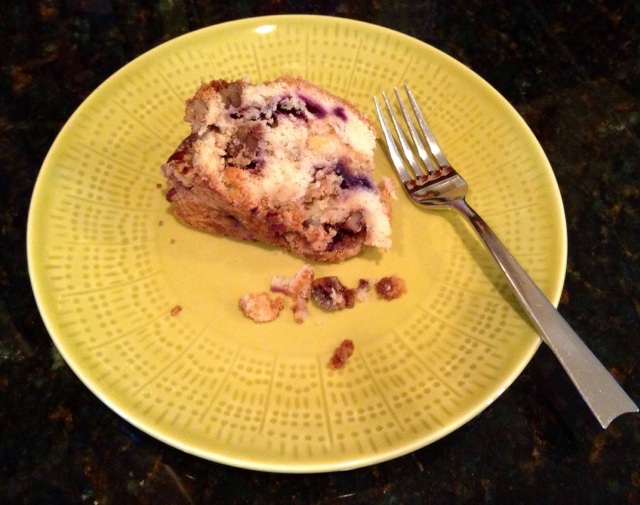