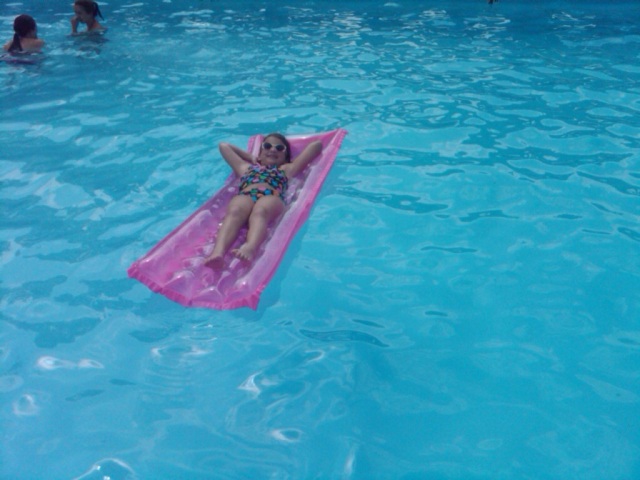 Ahhhh…..the lazy days of summer. Well, not so much lazy as they are relaxed. The mornings begin around seven, but instead of the obnoxious blare of the alarm clock, we wake at our leisure. We would be heading out at 7:30 a.m. for swimming, but, thankfully, it has been rainy and cool so we have skipped it. There have been no lunches to pack nor planners to sign. It feels so good to not feel like I have to be “on the muscle” making sure this assignment is progressing or that vocabulary list of words is understood.

How refreshing it is to not feel distracted by a lengthy laundry list of to-dos, but to actually feel present in conversation regarding the myriad of interests about which my ten-year-old randomly chatters. I can still hear the conversation with my own mother when I was about her same age. I would be rambling on and on about who-knows-what before realizing that she was tuned out. Indignantly I said, “Mom, you aren’t listening to a thing I am saying!” She’d say, “Lauri Ann, you haven’t stopped talking for twenty minutes straight!” It’s so nice to get a little glimpse of what it will be like to be a grandparent who gets to put life aside and enjoy nothing more than the sweet simplicity of their company.

There must be something about sleeping in a parent’s bedroom that makes it extra special. I must admit after three consecutive movie nights in mom and dad’s room, I have declared it to be a Kid Free Zone tonight. I will say that I do enjoy watching a movie laying on the bed, as tight as sardines (yes, after his big sigh, even the 56-pound Portuguese Water Dog snuggles in with us), with everyone laughing together at the funny parts. What I don’t enjoy is when my husband reverts to his younger alter-ego and hands out “monkey bites” where he takes great pleasure grabbing the fleshy part of your thigh and squeezing. The kids do much better than Mom at laughing during this torturous exercise…I get mad. It hurts like the dickens, and this self-proclaimed delicate flower finds no humor in pain.

Though I welcome the break from supervising her rigorous academic calendar, there are still parenting responsibilities that can’t be disregarded. I was reminded of the importance of those details when I was at my daughter’s voice lesson yesterday. Her homework for the week was to read the lyrics of a song on which she is working and articulate them as well and as clearly as she could, both reading them aloud and singing them. We used the dead time driving in the car to go through the exercise.

I told her voice teacher about this and he thought it would be very impactful. I said, “In our culture today, good articulation isn’t stressed. Kids aren’t talking to one another, they’re texting. Sometimes you will see them all sitting at a table together and no one is having a conversation. They could be texting the person sitting next to them. Worse yet, it is even happening at our own dinner tables and parents don’t want to battle their children about their phones (I will be doing a post on kids and cell phones at a later date). If they are talking, they think it sounds hip to say “yeah” instead of “yes” and “What up?” instead of “How are you?” He said, “Kids feel uncomfortable articulating clearly amongst their peers.” I agreed, and told him the same applies to table manners and modesty.

In our house, bad table manners aren’t an option. There is a level of expectation even if the television is on. We have repeated the rhyme “Mabel, Mabel, strong and able, get your elbows off the table!” so often that all we have to do is say, “Mabel” and it works like a charm. Sometimes all I have to do is clear my throat for a little unspoken “Heads up…your chewing with your mouth open.” 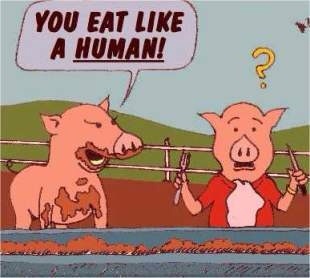 Recently, my husband had a great opportunity to show an example to our daughter when they stopped at KFC on the way home from swimming a few nights ago. Some muscle-head from the gym across the street got his food and sat at an adjacent table. He tore into his food like a ravenous bear and Grace literally pointed at him and told my husband, “Dad, look at his horrible table manners!” Of course, then my husband had to correct her on not pointing at others because it TOO falls into the bad manners category, but it was good for her to see first hand how bad table manners look to others.

As for modesty, the boys’ shorts have gotten longer, while the girl’s have gotten shorter… WAY shorter! I have seen shorts and wondered if the inseam was any longer than an inch. Why not wear underwear? They give a whole new meaning to the hot pants of the sixties. Historically, hemlines don’t get longer. It makes me shudder to think about it. I think many parents just get tired of battling their daughters and relent to these fashions. I say suit up! Here is what a concerned father did to discourage his beautiful daughter from wearing her shorts so short…love it! (For the record, I am not married to the man pictured below. I think my husband is the Best. Dad. Ever.) 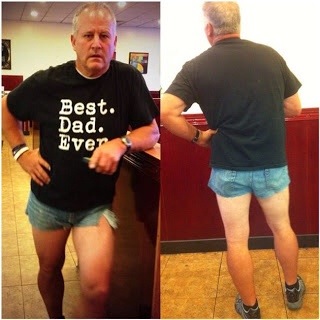 Though it is nice to have a reprieve from our usual harried schedule, I will continue to fight the good fight, because one day she will be interviewing for a job and will need to articulate clearly. She may someday have to take a customer to dinner to land a big deal and will be able to feel comfortable in the most refined of settings. When she goes to meet the parents of her future husband, she will know that they will be more likely to welcome her to the family if her undies aren’t spilling out of the bottom of her shorts! I guess it’s official…I am old-fashioned!

4 thoughts on “Suit Up Parents…Our Kids Are Worth It!”